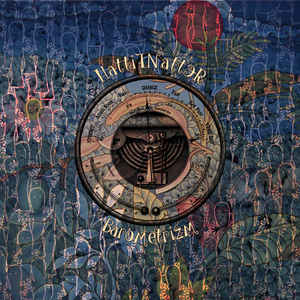 Background/Info: Hattifnatter is a project of Evgeniy Savenko (Lunar Abyss) and M.M. (Kryptogen Rundfunk). The project has been active since 2007 and is exploring ‘the psychoactive electro-acoustic ambience’, which took them several years to achieve this debut album.

Content: Hattifnatter definitely sounds like an alien experimenting with dark-ambient music and the least I can say is that this duo accomplished a real creative and fascinating piece of music.

The numerous field recordings accentuate the visual strength of the work while some howling wolves in the distant invite the listener to join an imaginary trip into horror.

+ + + : I’m not that surprised that it took 6 years to accomplish this opus. I’m really impressed by the global sound treatments and the meticulous decomposition and re-composition of multiple noise sources. This is the kind of dark-ambient music revealing a different approach, which is definitely more elaborate and complex than the usual standards.

– – – : “Barometrizm” is not exactly the most accessible work in the dark-ambient genre. The experimental input can be a serious obstacle to convince the die-hard fans in the genre.

Conclusion: If you think that dark-ambient music has been stagnate for too long, and has revealed no real elements in sound, you’d better give Hattifnatter a try. This is a more extreme, but visionary-like composition.