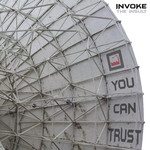 Background/Info: Invoke The Insult (ITI) is a Swedish duo I discovered by their self-released CDR-album “Let The Greedy Stand Trail”. The work revealed a retro-like 90s EBM sound. The band got signed to EK Product, but it finally took some time before they could accomplish this official debut work featuring 13 new songs.

Content: This is an album I was eagerly awaiting for and the least I can say is that I’m not disappointed. ITI deals with an old-styled EBM sound that will bring you back to the hottest dancefloors of 90s clubs. This is the kind of record that reminds me of the early work of Lost Image and Plastic Noise Experience with a touch of The Klinik on top. This is not the kind of EBM that sounds ultra powerful although it remains danceable and supported with dark leads.

The sound formula reveals no real surprises, but the composition has been accomplished with a taste of perfection. It’s a mature sound, which remains raw from start till the end. The harsh vocals fit the global sound atmosphere and danceable vibes.

+ + + : “You Can Trust” guarantees 100% old-styled EBM that will definitely please 90s lovers. The songs are well-crafted and especially the 2nd part of the opus is really interesting. There you’ll discover a few great cuts carried by cool retro-like sequences. I like the mix of danceable rhythms on one side and dark, haunting atmospheres hanging over the songs on the other side.

– – – : ITI avoids any kind of innovation. It’s an old-styled composition, which sometimes becomes a bit too predictable.

Conclusion: “You Can Trust” is the kind of familiar release you might expect on EK Product. This is an interesting debut, which might bring some good-old memories back to life.

Since you’re here … … we have a small favour to ask. More people are reading Side-Line Magazine than ever but advertising revenues across the media are falling fast. And unlike many news organisations, we haven’t put up a paywall – we want to keep our journalism as open as we can. So you can see why we need to ask for your help. Side-Line’s independent journalism takes a lot of time, money and hard work to produce. But we do it because we want to push the artists we like and who are equally fighting to survive. If everyone who reads our reporting, who likes it, helps fund it, our future would be much more secure. For as little as 5 US$, you can support Side-Line Magazine – and it only takes a minute. Thank you. The donations are safely powered by Paypal.
Tags: EBM, Invoke The Insult