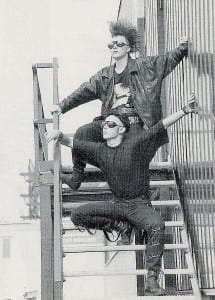 After the release of The Psychic Force’s comeback EP “Relapse”, Alfa Matrix now proceeds to the immediate re-release as HQ downloads of the German duo’s previous albums “Mutilations” and “Traces”, remastered and with quite some bonus tracks, on Bandcamp. For these re-release the The Psychic Force duo Michelle Christiansen and Jörg Charnowski spent the last month in the studio fully remastering their back-catalogue. The new cover artwork for both albums reissues was specially designed for the occasion by n0emi Aurora of Toxic Visions Design.

Originally released back in 1992, “Mutilation” is The Psychic Force’s debut album which initiated the band’s dark electro success with the classic club hits “Still Walking” and “Twilight Zone”. Besides the remastered 12 original tracks from this first album, you’ll get 6 exclusive bonus songs including “Totes Fleisch”, the first and only song ever sung by Jörg himself, or yet cover versions of Stephan Eicher’s ‘Noiseboys’ and Boney M’s “Exodus”.

Next is “Traces” which was originally released back in 1994. It was The Psychic Force’s second album which brought the band’s sound into a mixture of raw harsh electro and icy atmospheric electronics à la Klinik and featured the duo’s collaboration with Sven Klose (lyricist for the album and guest vocalist on the harsh “Gravity Is Present”). Besides the remastered 11 original tracks from the “Traces” album, you also get 7 bonus songs previously released on rare compilations or Popkomm promo CD’s.

Since you’re here … … we have a small favour to ask. More people are reading Side-Line Magazine than ever but advertising revenues across the media are falling fast. And unlike many news organisations, we haven’t put up a paywall – we want to keep our journalism as open as we can. So you can see why we need to ask for your help. Side-Line’s independent journalism takes a lot of time, money and hard work to produce. But we do it because we want to push the artists we like and who are equally fighting to survive. If everyone who reads our reporting, who likes it, helps fund it, our future would be much more secure. For as little as 5 US$, you can support Side-Line Magazine – and it only takes a minute. Thank you. The donations are safely powered by Paypal.
Tags: The Psychic Force