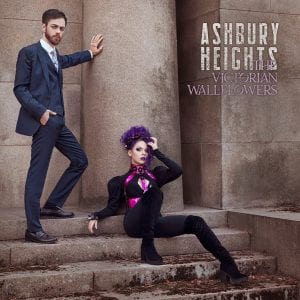 Background/Info: Swedish duo Anders Hagström – Tea F. Thimé are back on track unleashing the fourth full length album from their sonic brainchild Ashbury Heights. They got a helping hand in the production process by Mario Rühlicke (Blutengel).

Content: Ashbury Heights remains inspired by electro-pop music although I experienced this opus as touching ground with indie-pop. The songs are pretty dance-like, mainly characterized by happy-pop tunes and carrying –and sometimes techno-driven, choruses. The female vocals remain a quite noticeable element, but there still is a sweet harmony with the male backings.

+ + + : Tea F. Thimé remains one of the main strengths from this band. She has a powerful and alluring timbre of voice, which really put her stamp on this band. Sound-wise I experienced this work as the most ‘happy’-sounding ones in the band’s discography. But the main- and most noticeable evolution is the global sound production. Ashbury Heights has reached an ultra professional level.

– – – : I always have liked Ashbury Heights because they bring a more personal electro-pop style. But this new opus sounds now and then a bit too ‘commercial’ or ‘dance’-like. The choruses are cool, but on a few tracks it clearly sounds a bit ‘teenager’-like.

Conclusion: I’m missing the magic from previous releases. Ashbury Heights remain to me a great and talented band, but this new opus can’t fully satisfy me.