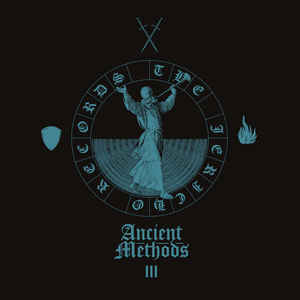 Originally set up as a duo, Michael Wollenhaupt remained the single member on board. After numerous EP’s Ancient Methods has now released its debut full length  -available as 3-vinyl format, featuring 14 tracks.

Content: The sound of Ancient Methods is clearly driven by industrial-techno vibes. From heavy, bouncing cuts carried by a big kick to frenetic-trance passages to somewhat mysterious and Eastern-like atmospheres this work is quite diversified. You’ll also notice multiple sound effects, exciting electronic signals and even a few passages with vocals.

“The Jericho Methods” also reveals the contribution of some famous guest artists such as Orphx, Prurient, Cindytalk, Regis and a few more vocalists.

+ + + : I like the sonic fusion between techno- and industrial music and especially when it has been accomplished with passion and knowledge. The sound production reveals multiple great aspects and I especially enjoyed the heavy blasting sounds running through the album. The contribution of some talented guest artists also adds a little extra to the work. “The Jericho Methods” is an accomplished and diversified piece of music featuring multiple noticeable cuts.

– – – : I can’t get away that this kind of music is a bit too dark for techno heads and maybe too techno-driven for industrial lovers, but one thing is for sure, there’s a growing audience for this kind of music. Back to the album now, I personally expected a bit more from the songs that featured guest artists.

Conclusion: Welcome to the world of Ancient Methods, revealing a successful work filled with styled industrial-techno.

Best songs: “The House Of Rahab”, “Treason Creeps In”, “I Am Your New King feat. King Dude”, “Twelve Stones To Divide Jordan’s Sand”, “Crack And Collapse In The Storm Of Lights”.