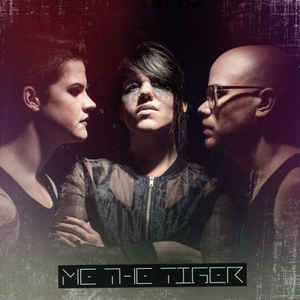 Background/Info: The Swedish trio Me The Tiger took me by surprise last year with their official debut album “Vitriolic”. The work revealed an interesting and refreshing electro-pop sound. The band is now back on track re-releasing their original self-released album “Me The Tiger”. The work was originally released during 2013 as an 8-track digital work. This new version features the 8 original songs plus an extra cut.

Content: “Me The Tiger” features a refreshing pop-format revealing a harmonious mix between electronic parts and guitar. The guitar is more present on this composition. It sounds a bit rock-like while the electronic passages inject typical pop vibes featuring carrying melody lines. The sound is dark and still pretty indie-like. There’s a nice twist between powerful passages and reverie parts.

The electronic treatments are pretty raw and yet always melodic. Several songs are quite transcendental and there’re several climaxes on the album. Another essential element of the band is the fragile and sensual way of singing by Gabriella Åström. She brings passion and emotion to the songs. She sometimes makes me think of a kind of ‘lolita’-voice although she can sing with passion and rage as well.

The extra song “Borlänge” is a cool addition to the original work and a new elevating piece of music.

+ + + : There’s a perfect match between guitar and electronics. The electronic treatments are characterized by carrying melody lines and some refined arrangements. The songs are pretty elaborate and often ending in a true apotheosis. The production of the vocals is another essential aspect of this work and band. Last, but not least, the song “Pocket Sized Edition Ending” is a real hit!

– – – : There’s no real minus point on this album although I think the artwork could have been a bit more creative and artistic.

Conclusion: This album simply deserves to get re-edited. There are several essential cuts on it and I even prefer this work to the “Vitriolic”-album. It simply confirms this is a talented formation injecting a fresh breeze to the electro-pop universe.