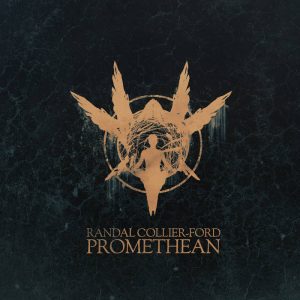 Background/Info: Randal Collier-Ford is now already active for a couple of years and has released multiple noticeable productions. This new opus is the next chapter in the projects history, which is succeeding and even achieving the work that was featured on the albums “The Architects” and “Remnants”. ‘Promethean is a multilayered effort to tell an overarching storyline, through multiple timelines and multiple realities. To allow the listener to dive deep into each tracks meaning in their symbolism, how they tie the album together, as well as the series.’

Content: Time is moving by, but has no real impact on the work of this artist. “Promethean” moves on there where previous albums stopped. The opening cut is an interesting piece taking off with a spoken, ghostlike part. It creates an instant chilling sensation, which will be accentuated the entire album long.

The listener is surrounded by dark atmospheres, now and then accentuated by instruments reminding to saxophone, violin and piano. Heavier electronic sound blasts are joining in. It all together creates this cinematographic impression, which is always present in the work of this artist.

Notice by the way that 2 cuts were accomplished with guests; first Northumbria and next Simon Heath (Atrium Carceri, Cryo chamber label owner).

+ + + : Randal Collier-Ford again reveals great composing skills and clearly knows the way to compose poignant dark-ambient music refined with some neo-classicism. It’s an artistic exposure of how dark-ambient music has to sound. But it also is –and once again, a diversified opus with an open-minded vision and a wider arsenal of influences. The debut- and final cut both are brilliant exposures of this fascinating album.

– – – : If I can imagine just one single reproach it definitely is that Randal Collier-Ford is not a project reinventing its own sound. This work moves right at the point where the previous albums stopped.

Conclusion: Randal Collier-Ford belongs to this contemporary group of dark-ambient artists who are more dealing with diversity and the implementation of extra influences. “Promethean” features a few impressive cuts next to other tracks that are less fascinating.