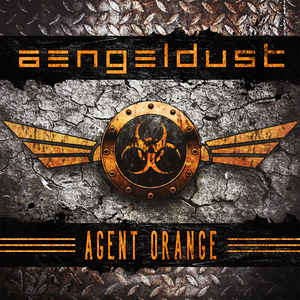 Background/Info: Three years after the debut-album “Freakshow” Nadine ‘Cooraz’ Engel is back with her newest opus “Agent Orange”. Nadine is still involved with her husband in Acylum and Totem Obscura.

Content: “Agent Orange” sounds different than its predecessor. The harsh and merciless electro-industrial sound of the debut work evolved towards a more ‘classical’ dark-electro sound à la Acylum plus a few medieval elements à la Totem Obscura. Aengeldust in a way became the offspring between her other projects although there’s a more industrial- and even somewhat anarchistic flavor supporting this work.

The samplings are pretty important on “Agent Orange”, for accentuating a kind of disturbing atmosphere. A few cuts have been composed together with ‘guests’ such as Circuito Cerrado, FabrikC, Project Erratic and DJ Ele.

+ + + : I can’t get away from the idea that Nadine’s husband Pedro Engel has helped her with the global composition and production. He however sounds as an important source of inspiration, but this album will also appeal for lovers of Wumpscut and Heimataerde. I like the global evolution from the first album towards “Agent Orange”. The work is maybe a little less original, but damned efficient. Most of the samplings add a real bonus to the work and I especially like some passages where I think to have recognized Winston Churchill. Aengeldust sounds dark and tormented while having accomplished a few great cuts. The song “Duce” is an attention grabber and I also enjoyed the version together with FabrikC.

– – – : My single regret is that the tracks start to get a little bit too similar and repetitive after a while.

Conclusion: Aengeldust achieved a noticeable work, which has the potential to find a place next to the great Acylum! Nadine and Pedro Engel feel a bit like the Bonnie & Clyde of the dark-electro scene!

Since you’re here … … we have a small favour to ask. More people are reading Side-Line Magazine than ever but advertising revenues across the media are falling fast. And unlike many news organisations, we haven’t put up a paywall – we want to keep our journalism as open as we can. So you can see why we need to ask for your help. Side-Line’s independent journalism takes a lot of time, money and hard work to produce. But we do it because we want to push the artists we like and who are equally fighting to survive. If everyone who reads our reporting, who likes it, helps fund it, our future would be much more secure. For as little as 5 US$, you can support Side-Line Magazine – and it only takes a minute. Thank you. The donations are safely powered by Paypal.
Tags: Acylum, Aengeldust, Heimataerde, Wumpscut