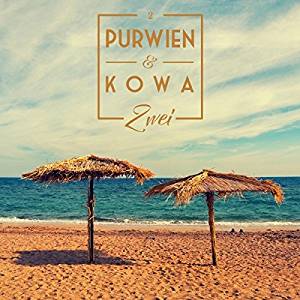 Background/Info: Christian Purwien (ex Second Decay) and producer Thomas Kowa joined hands to release this album. Purwien already released an album entitled “Eins” in 2007 on Major Records. We can speak about a kind of comeback of the ex-Second Decay member.

Content: “Zwei” is an album moving from rather dance-pop songs to refreshing although retro-like electro-pop music. The songs are catchy and danceable, and especially well-crafted and carried by an impressive production.

“Zwei” is a catchy and entertaining production, which sometimes sound a bit at the edge of commercial music, but quite progressively moving back to rather classical electro-pop music. Most of the songs have been sung in German, but there also is a great song at the end sung in English.

Both last cuts are extracts from “Pommespornopopstars”, which is a novel written by Kowa. It sounds funny and just a kind of bonus to the main music chapter.

+ + + : I was a huge admirer of Second Decay, which I still consider as one of the best electro-pop formations from the 90s. So it was a real pleasure to get some new music composed by Christian Purwien and especially some of the last cuts of the album remind me a bit of this great band. The songs are styled, carried by solid melodies and choruses. It’s a catchy production, which will especially appeal for lovers of more ‘commercial’ dance-pop music. The song “People From Ibiza” is a funny, but great club-minded song.

– – – : Some cuts are a little bit too commercial-orientated for me. It’s not exactly the most original music I’ve heard in this vein, but it will for sure catch the attention of numerous DJ’s.

Conclusion: “Zwei” is technically speaking a great production, but the content sometimes appears to be a little bit too commercial, uninspired and therefore predictable.