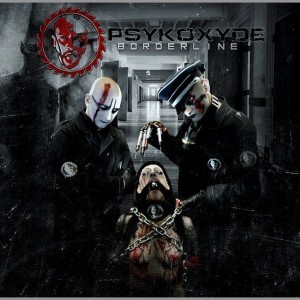 Background/Info: Psykoxyde is an Italian duo that was set up in 2011 with some metal background. The sound has clearly been inspired by dark-electronics and aggrotech. “Borderline” is the 2nd full length by Von Ilian and Elfire.

Content: Psykoxyde reveals a rather traditional, but noticeable image, which is quite comparable to their music. After an intro cut “Borderline” invites its audience to embrace typical harsh (h)el(l)ectronics carried by hard beats and simple, but efficient cold sequences. The zombie-like growls of the singer are quite classic as well. One of the main characteristics of the work is the constant care for melodic loops and captivating leads.

The band might appeal to lovers of Hocico and co. Psykoxyde clearly doesn’t reinvent the dark-electro genre, but appears to be a faithful adherent of the genre.

+ + + : “Borderline” is a respectable work in the most classical fields of dark-electronics. The band clearly avoids any kind of innovation preferring to hold on and emulate their favorite music genre. The melodic loops are one of the main characteristics and strengths of the band. Psykoxyde also reveals to compose the perfect music for clubs devoted to this genre of music.

– – – : I don’t have anything against stereotypical releases without a lack of innovation –especially when the production is good, but it sometimes sound a bit too easy and without any element personal input. This album clearly sounds like a new emulation of a successful sound formula, but doesn’t reveal a real sound-DNA.

Conclusion: If you’re a dark-electro die-hard fan, who just wants to know all the bands in the genre, this is definitely an album to discover. But if you belief that the dark-electro genre sometimes need refreshing elements, you better keep on playing the real masters in the genre!

Best songs: “The Masonic Apocalypse”, “The Rot Inside The Brain”, “Schwarze Sonne”.