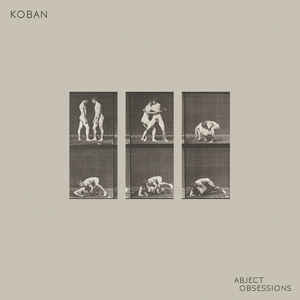 Background/Info: Hailing from Vancouver (Canada) Koban is a young duo consisting of Samuel Buss and Brittany West. They already released a few productions and got now signed to the Italian Avant! Records to unleash their 2nd full length album available both on vinyl and CD.

Content: “Abject Obsessions” smells like good-old new-wave music taking off in a rather shoegaze and dream-pop way and moving on with vintage electronics reminding me of The Neon Judgement and Absolute Body Control. The songs are minimalistic and rather short in duration.

The vocals are another particular element of the work. There’s a mix between English male vocal parts and French spoken female ones. The vocals are pretty complementary and produced the typical sterile 80s style. Koban definitely sounds like devoted to the magic years of the 80s and every single element on this work reinforces their love and adoration for that glorious decade.

+ + + : The originality is far to find, but the global minimalism supporting this work and the symbiosis between electronics and guitar is absolutely remarkable. You really get the impression of discovering a lost band from the 80s. The work only features 10 songs, but there’s none to throw away. This album is a little pearl in the genre.

– – – : When an album is that good you really can’t have any kind of regret… except that the songs are rather short and the tracklist remains pretty restricted. “Abject Obsessions” is an opus you cannot get not enough of.

Conclusion: There’re more and more new and promising formations perfectly emulating the spirit of the 80s new-wave decade. Koban definitely is one we can add to the list; this album is absolutely great and essential!