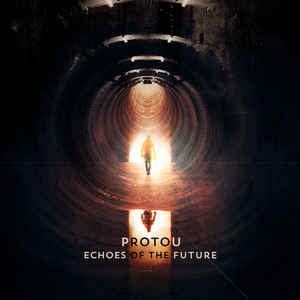 Background/Info: Ukrainian artist Sasha Puzan is a very prolific musician. Since her debut album in 2015 together with her partner in crime Dronny Darko, she didn’t stop releasing new material. This is her fourth solo-work while she also released other albums together with Hilyard, Alphaxone plus the “Tomb Of Druids”-album together with other Cryo Chamber artists.

Content: “Echoes Of The Future” deals with the imaginary concept of leaving the earth. It’s an astral voyage towards an unknown destination, maybe a better world for our civilization. This theme has been remarkably adapted into a sonic voyage, which remains dark-like, but still characterized by a feeling of evasion and freedom. The tracks bring the listener into a progressive sonic storm, some of the final tracks being a little bit more hostile. Spoken samplings are accentuating the mystery around this obscure odyssey while enigmatic field recordings only reinforce the atmosphere.

+ + + : Especially the first part of the work reveals an intimate atmosphere and I even felt like an intruder entering into the secret world of the musician. But music is made to get shared with people and quite progressively I experienced the visual strength of this epos. Quite progressively the work moves into darker and overwhelming passages. “Hounds Of The Void” is the freakiest part of the work.

– – – : The single reproach I could figure is that Sasha Puzan is not exactly evolving in her approach. The influences and format remain the same-old, but at the other side she clearly has a very own sound DNA.

Conclusion: ProtoU remains one of the most delicate and subtle artists from the contemporary dark-ambient scene. This album is a real noticeable production illustrating and confirming her talent.

Best songs: “Hounds Of The Void”, “Vessels Of God”, “Transmissions”.