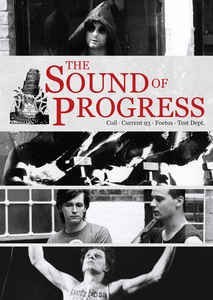 Background/Info: “The Sound Of Progress” is a documentary, which was originally released in 1988 on VHS format by Marc van der Bijl. It featured 4 pioneers and influential artists from the ‘industrial’ and ‘experimental’ scene. This legendary documentary has been now remastered and released for the very first time on DVD by Cold Spring Records. It’s a very informative documentary featuring interviews, studio rehearsals and live extracts.

Content: you’ve to replace this documentary in the right context; we’re getting back to the midst of the 80s when industrial music was a kind of answer (and reaction) against commercial music. The 80s were also characterized by the end of the cold-war and growing unemployment so we can’t really say there was a stable political system while England was also under the influence of the conflict in the Falklands.

Bands like Test Department and Current 93 were concerned about politics, which is an aspect that comes through in this movie. Coil has been filmed at the home of Peter Christopherson and definitely remains the craziest bands from the list. Multiple extracts of live concerts from all those artists are bringing the 80s spirit to life. You also get a great selection of pictures from all the bands.

+ + + : It’s an essential documentary getting us back to the early work of those great artists. It also is an opportunity to get a bit more familiar with the early wave of industrial artists, which is totally different from the contemporary music. The live performances of Test Department were really impressive and in the true spirit of industrial music. Foetus was more into a kind of industrial-punk attitude while it also interesting to see Coil at work in their studio. Industrial music also was a real creative process of artists building some of their own ‘instruments’.

– – – : My only regret is that the documentary is maybe a little bit short and maybe missing some information like why did the producer choose those bands rather than others (think about SPK, Einstürzende Neubauten, The Swans, Non, Monte Cazazza, Z’ev ao…).

Conclusion: “The Sound Of Progress” stands for the true spirit of industrial music, which had something intelligent although even a bit elitist.

Since you’re here … … we have a small favour to ask. More people are reading Side-Line Magazine than ever but advertising revenues across the media are falling fast. And unlike many news organisations, we haven’t put up a paywall – we want to keep our journalism as open as we can. So you can see why we need to ask for your help. Side-Line’s independent journalism takes a lot of time, money and hard work to produce. But we do it because we want to push the artists we like and who are equally fighting to survive. If everyone who reads our reporting, who likes it, helps fund it, our future would be much more secure. For as little as 5 US$, you can support Side-Line Magazine – and it only takes a minute. Thank you. The donations are safely powered by Paypal.
Tags: Foetus, Swans, V/A, V/A The Sound Of Progress