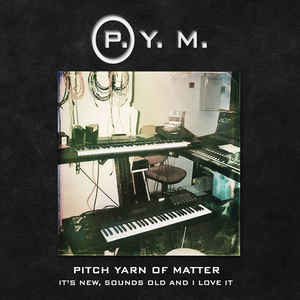 Background/Info: Pitch Yarn Of Matter (P.Y.M.) is a Brazilian formation that was active during the 90s releasing a cassette on the legendary Cri Du Chat label while they next got signed in Europe by Subtronic Records. Twenty years after the second full length (cf. “Strange Body”) the band is now back on track. Master mind Marcello Gallo remains the single member on board although got assistance from a few guests (featuring early members of P.Y.M.).

Content: This is for sure a new start and the title of the album clearly indicates what this new work is all about. We get a 100% electronic album composed by good-old analogue gear that brings us back to the magic of the late 80s electro-pop music.

Electro-pop is definitely the main basis of the work, but you’ll also notice a few EBM sequences, wafting atmospheres and even a kind of nu-disco touch. On other cuts you clearly can recognize a Kraftwerk influence running through the songs and/or robotic vocal parts.

+ + + : This album is more than simply a comeback, it’s a new and successful start. The work has been accomplished with the magic of good-old analogue equipment. The electro-pop style has been joined by different influences getting it all varied while featuring multiple cool songs and even a few potential hits (cf. “Full Of Nothing” and “Plastic Girl”). The remix of “Alles Schwarz” is another pretty cool cut!

– – – : The main difficulty for P.Y.M. will be for sure –and especially here in Europe, to get their name back on the map! The front cover could have been a bit more creative and rather looks like a picture you should have placed inside the cover.

Conclusion: It’s new, Sounds Old, And WE love it!

Since you’re here … … we have a small favour to ask. More people are reading Side-Line Magazine than ever but advertising revenues across the media are falling fast. And unlike many news organisations, we haven’t put up a paywall – we want to keep our journalism as open as we can. So you can see why we need to ask for your help. Side-Line’s independent journalism takes a lot of time, money and hard work to produce. But we do it because we want to push the artists we like and who are equally fighting to survive. If everyone who reads our reporting, who likes it, helps fund it, our future would be much more secure. For as little as 5 US$, you can support Side-Line Magazine – and it only takes a minute. Thank you. The donations are safely powered by Paypal.
Tags: EBM, Kraftwerk, Pitch Yarn Of Matter