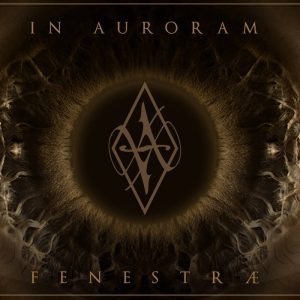 Background/Info: The duo, In Auroram was set up during the early millennium years. Asteria and Ricardo Santos released their debut album “When Daylight Fades” in 2009 and are now finally striking back with this new opus featuring 12 songs. The lyrics have been inspired on Fernando Pessoa’s “Book Of Disquiet”.

Content: “Fenestrae” sounds like an invitation to dream away and travel throughout imaginary territories filled with ethereal chants, mystic atmospheres and other darker ambient passages. I also noticed some tribal elements.

This is the kind of work with a real cinematographic feeling, which is accentuated by the female vocals of Asteria.

+ + + : There are several beautiful songs on this opus. It sounds heavenly and still a bit dark and mystic-like while tribal elements running throughout the great “Abstract Mundi” and “Fenestrae” are definitely the highlights of the work. I also have to mention the beautiful “Ocaso Horae” for its heavenly sensation.

– – – : I can’t get away from the idea that some of the synth sounds could have been a bit more original. It sometimes sounds like easy presets.

Conclusion: Globally speaking this is a beautiful and evasive piece of work and yet I’m convinced there’s even more potential in this band than what I’ve heard.

Best songs: “Ocaso Horae”, “Abstract Mundi”, “Fenestrae”, Through The Windows Of My Eyes”.