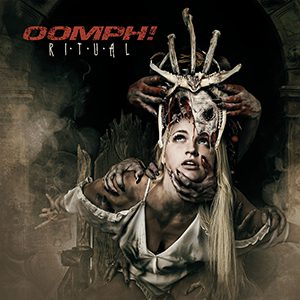 Already the 13th album for OOMPH!, the German band from the area of Wolfsburg that exists of Dero (vocals/drums), Flux (guitars/samples) and Crap (guitars/keyboards), and that inspired bands like Rammstein, Eisbrecher, Megaherz and Unheilig.

Content: 11 tracks about war, politics and abuse are featured in this jewel-case edition that opens with the first released single “Tausend Mann Und Ein Befehl”, an anti-war song with a sing-a-long chorus. Fans of Disturbed will like “Achtung! Achtung!” that contains very nice nu-metal riffs and a dramatic chorus. Second single “Kein Liebeslied” has some riffs that reminded strongly on Rammstein, although no Rammstein without OOMPH!. “Trümmerkinder” starts with the sound of a marching army and is a very uptempo song with strong lyrics. “Europa” is a political song with a guest-appearance of Chris Harms (Lord Of The Lost). “Im Namen Des Vaters” is another uptempo rocking song and has an aggressive chorus. “Das Schweigen Der Lämmer” and “Seine Seele” are the only two calmer ballads. “TRRR – FCKN – HTLR” is an opus about terror, porn and nazis, followed by “Phönix Aus Der Asche” that in the end sounds a bit like System Of A Down. “Lass’ Die Beute Frei” was for me the best song especially because of the very nice melodic voice of Dero and the very catchy guitar-riffs.

+ + + : Singer/frontman Dero knows very well how to use his voice in different ways, high and low, screaming and whispering, harsh and soft. The guitars sound very heavy but melodic and well produced. This album sounds more metal than ever before.

– – – : This album is very guitar-oriented, not much sampling and almost no EBM-style elements were included anymore.

Conclusion: OOMPH! still sounds as fresh as almost 30 years ago, when they started their career, and show once again that they are still the leading founders of this genre. Fans of Marilyn Manson, Fear Factory and Rammstein will surely like this album! “Ritual” is also released on vinyl and the limited edition digipak contains 3 bonus songs.

Since you’re here … … we have a small favour to ask. More people are reading Side-Line Magazine than ever but advertising revenues across the media are falling fast. And unlike many news organisations, we haven’t put up a paywall – we want to keep our journalism as open as we can. So you can see why we need to ask for your help. Side-Line’s independent journalism takes a lot of time, money and hard work to produce. But we do it because we want to push the artists we like and who are equally fighting to survive. If everyone who reads our reporting, who likes it, helps fund it, our future would be much more secure. For as little as 5 US$, you can support Side-Line Magazine – and it only takes a minute. Thank you. The donations are safely powered by Paypal.
Tags: Eisbrecher, industrial-metal, Megaherz, Neue Deutsche Härte, OOMPH!, Rammstein, ritual, terror