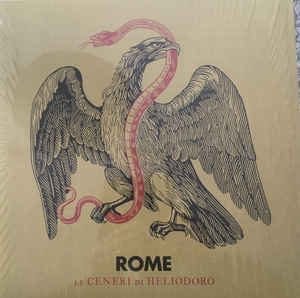 Content: When listening to Rome you first hear the music, but next also have to pay attention for the lyrical content. Sound-wise this work is a move back to martial- and neo-folk influences, Rome mainly deal with during his early years. But the influences have been merged together with the styled ‘chanson’ approach from the pas- years. “Le Ceneri Di Heliodoro” this way becomes a sonic osmosis between all influences and genres this musician has experienced with.

Lyrically the album clearly sounds like a reflection and metaphor to the situation of our old continent Europe.

+ + + : Rome stands for darkness; it’s not exactly the kind of music that will make you happy although the artistic creation once more caught my attention. The way good-old martial elements and neo-folk have been mixed with the recent evolution and sound of Rome is once again a real ‘tour de force’. The songs are dark and beautiful pieces interpreted by a passionate singer. Jérôme Reuter has been joined by a few backing vocalists sometimes creating the effect of a choir. Just pay attention for the effect it creates at “Black Crane” to realize the impact of this production. But I also have to mention “The West Knows Best” characterized by a whistling passage. It’s totally unexpected, but it has something enlightening. A last word about the lyrics, which aside of their content also reveals a real poetry.

– – – : I should say this album brings nothing new; all influences running through this work indeed are familiar, but the way they’ve been intermixed is remarkable.

Conclusion: Rome never stops taking me by surprise; “Le Ceneri Di Heliodoro” could be considered as the ‘referential’ album featuring all influences this great musician has ever dealt with.