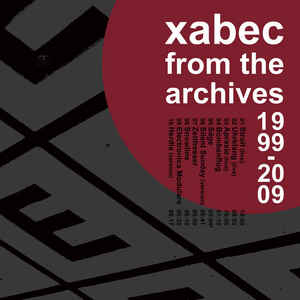 Background/Info: Set up by Manuel G. Richter in the late 90s and remaining active until 2013, Xabec seems to be back on track. The title of the album reveals a retrospective featuring 10 tracks. The tracklist reveals 3 live cuts, 4 songs taken from 7”, 2 previously unreleased cuts and 1 song taken from a compilation. Some of the songs have been reworked while they all have been remastered.

Content: Xabec remains to me one of the most experimental- and abstracts projects from the Hands roster. It more appears to be sound research instead of a composition process. This album even accentuates the experimental side of Xabec’s work.

+ + + : Xabec is a sonic experience you going to like or dislike. There’s no real way in between expect if you like unique sound treatments. That’s precisely what this look into the archives has to offer. From icy, cellar music to a great sonic canvas made with little noises to overwhelming atmospheres the album covers a wide range of influences. I like the whipping sound manipulations running through “Apraxie” (live) and the disturbing sphere emerging at “Bombenflug”. I also have to mention the previously unreleased “Herdla”, which is a cool last track with an anguishing sound atmosphere.

– – – : I’m not that convinced about the live tracks revealing an ultra experimental/abstract approach. It sometimes sounds into pure improvisation while I’m missing a more ‘structured’ composition.

Conclusion: This ‘archives’ bring some rare- and previously unreleased songs into the spotlights and even for the very first time on CD-format. The fans will be satisfied!

Since you’re here … … we have a small favour to ask. More people are reading Side-Line Magazine than ever but advertising revenues across the media are falling fast. And unlike many news organisations, we haven’t put up a paywall – we want to keep our journalism as open as we can. So you can see why we need to ask for your help. Side-Line’s independent journalism takes a lot of time, money and hard work to produce. But we do it because we want to push the artists we like and who are equally fighting to survive. If everyone who reads our reporting, who likes it, helps fund it, our future would be much more secure. For as little as 5 US$, you can support Side-Line Magazine – and it only takes a minute. Thank you. The donations are safely powered by Paypal.
Tags: Xabec