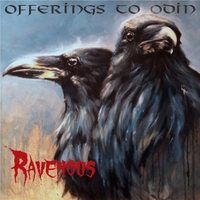 Background/Info: Offerings To Odin is a Denver based band consisting of Stephen Bailey and Joel Walker aka Svipal. The band has been active since 2012 and claims to be inspired by themes like mythology, runes, art, misanthropy, dancing, video games, beer, wine, food, electronics, history, synth building, hockey while the music clearly sounds dark and electro-like. “Ravenous” is their debut-album, which was already released a few months ago.

Content: “Ravenous” clearly sounds inspired by elements of dark-electro and EBM. The songs are carried by melodic passages, which clearly is one of the album’s main characteristics. The sound is not exactly into the typical kind of dark-electro format, but remains rather ‘soft’, a bit moody-like, but danceable.

Most of the vocal lines are harsh and compressed although the band experiences with a few other ideas like whispering passages and an interesting half-spoken experiment on “Familiar Taste Of Blood”. This is an interesting cut as it was originally written by Enduser and Rachel Kann (cf. album “Comparing Paths”).

A few cuts are a little more powerful and fast, but globally speaking “Ravenous” remains driven by slow tempos.

+ + + : “Ravenous” features less surprises and no real innovation although the already mentioned “Familiar Taste Of Blood” is an interesting experiment accomplished with refreshing sounds and a different vocals production. Even the rhythms sound different and a bit broken-like. This is for sure the most original song of the album. About the other tracks, I especially like the melodic aspect supporting the songs, which makes Offerings To Odin quite accessible.

– – – : The ideas and intention is pretty okay, but you can hear that this is a debut album. Most of the songs suffer from a lack of elaboration. The global production remains a bit unaccomplished.

Conclusion: I don’t want to be severe; “Ravenous” is a debut album revealing a few cool ideas the band now has to elaborate and improve. Just put this work in the hands of an experienced producer and Offerings To Odin will sound different for sure!