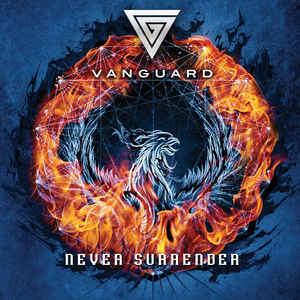 Background/Info: Vanguard is back on track with their 3rd full length album to date. Jonas Olofsson and Patrik Hansson are a Swedish duo I’ve been keeping an eye on since their early debut. They got signed to Conzoom Records on, which they released great work. They last year moved to Infacted Recordings unleashing the EP “I Want To Live” which got enthusiastic reactions.

Content: Vanguard didn’t spare any effort to bring their sound to a higher level. They asked Rob Dust to produce the new work and the least I can say is that the addition of an experienced and talented producer can only improve your work.

The sound remains pretty faithful to the original sound of Vanguard. It’s a kind of powerful electro-pop style, which reminds me –once again, of Mesh. There’s this similar nose to create carrying choruses driven by lyrics you’ll rapidly keep in mind to sing along with Jonas Olofsson. The songs are elaborated and characterized by bouncing kicks. I however discovered a few calmer and more moody cuts. There definitely is some variation in the songs and this diversity makes the album more accessible. You sometimes need a kind of ‘intermezzo’ before getting back to the powerful cuts.

+ + + : I had to listen a few times to this work before I really caught the essence made of little sound details, hopping rhythms and some subtle arrangements. The global structure of progression of the songwriting is admirable and fully accomplished. The elaboration of some songs is even leading towards a kind of climax. The song “I Want To Live” is a real hit! A last, but essential aspect of Vanguard remains the great singing skills of Jonas Olofsson.

– – – : Vanguard will maybe get bored with all the possible comparisons with Mesh, but I simply experience their sound as the ‘Swedish Mesh’. The only point that makes the difference between both formations is that they still have to go a long way before reaching the same level.

Conclusion: After having released 3 albums and an impressive number of EP’s we definitely might affirm that Vanguard is one of the hottest electro-pop bands from the past years while “Veritas” can be easily considered as their opus-magnum.

Since you’re here … … we have a small favour to ask. More people are reading Side-Line Magazine than ever but advertising revenues across the media are falling fast. And unlike many news organisations, we haven’t put up a paywall – we want to keep our journalism as open as we can. So you can see why we need to ask for your help. Side-Line’s independent journalism takes a lot of time, money and hard work to produce. But we do it because we want to push the artists we like and who are equally fighting to survive. If everyone who reads our reporting, who likes it, helps fund it, our future would be much more secure. For as little as 5 US$, you can support Side-Line Magazine – and it only takes a minute. Thank you. The donations are safely powered by Paypal.
Tags: Mesh, Vanguard