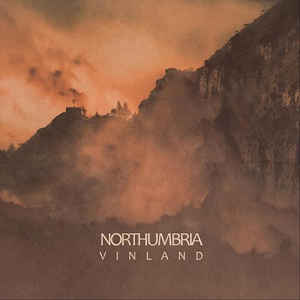 Background/Info: On “Vinland” Jim Field and Dorian Williamson achieve their trilogy dealing with the splendor of the Canadian High-North. It also is their fifth full length album to date.

Content: “Helluland” (2015) and especially “Markland” (2017) both were fascinating sonic odysseys. “Vinland” moves on a similar, dark evasive way. The compositions are into pure dark-cinematic style, accomplished with field recordings, guitar and bass guitar. On top of it all you also will notice overwhelming sound blasts. The major part of the work is definitely cinematographic-like, but I also noticed a few excellent and more dark-ambient orientated cuts.

+ + + : The way Northumbria are playing the guitar and manipulating the sounds is a quite noticeable element. It now injects an authentic touch to the work and next moves into somewhat psychedelic passages (cf. “Frozen Lake”). The cinematographic aspect of the work reflects a dark and prosper atmosphere. But I personally prefer the more dark-ambient tracks (although pretty close to the cinematographic approach). “The Windjigò” and “Overwintering” both are noticeable cuts, but especially “Vinland” is a truly masterpiece. The dark mood give you goosebumps.

– – – : I here get a similar feeling as on other releases. Some passages are less diversified and a little bit monotonous.

Conclusion: “Helluland”, “Markland” and now “Vinland” are albums you really have to see and consider as a wider entity. They constitute a fascinating trilogy on, which you perfectly can feel the inspiration from nature transposed into sounds and noises.