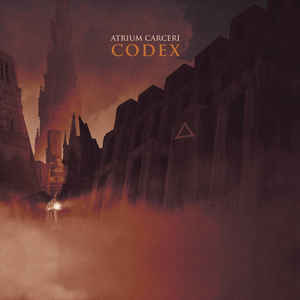 + + + : It’s interesting to see the evolution of Atrium Carceri from his very first releases on Cold Meat Industry towards the recent productions. It’s a move from pure dark-ambient towards a more dark-cinematic work. The common element remains the overwhelming darkness supporting all of the productions and, which now again characterizes the new work. The anguishing passages have a very strong visual appeal. Simon Heath creates an obscure, but harmonious fusion between all the dark ingredients. The musician transforms himself into a truly sound scientist who knows the formula to transpose sounds into imaginary images.

– – – : I maybe would have preferred a few longer and more elaborated cuts instead on these eleven cuts. But globally speaking, Atrium Carceri remains faithful to its poignant sound universe.

Conclusion: Darkness can become something intimate and even personal so you sometimes feel as a voyeur discovering the sonic universe of “Codex”.

Best songs: “Sacrifice To The Machine”, “The Ancient City”, “The Void”, “The Citadel”.