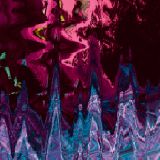 Content: Nicklas Stenemo and Christian Berg better known as Kite are back on track delivering their 6th (cf. “VI”)-EP to date. The duo has always been a real particular formation for its global concept, avoiding to be considered as an ‘average’ synth-pop formation, and for their sound.

Kite appears to be a kind of antidote to established synth-pop formations trying to emulate a bigger band in the genre. Kite has never released a full length album and it all looks like it’s not really their cup of tea. Quite progressively the band is getting more and more recognition and this new EP will possibly become the work that will really push them into the spotlight.

“VI” is a little jewel revealing unique sound treatments, mainly based on vintage electro sounds and the golden 80s electronics. The somewhat androgenic timbre of voice of the singer always has been one of the main characteristics of Kite and it’s not that different on “VI”. The least I can say is that this EP reveals a magic twist between passionate and captivating vocals and refreshing electronics.

“Up for Life” appears to be a sweet, and enjoyable opener till the final part of the song, which is absolutely magnificent. The progression of this composition moves from an elevating chorus towards an apotheosis featuring children choir and pure old-styled electro treatments. This song will entertain you for more than 8 minutes reaching an absolute climax.

The next two songs are carried by dynamic rhythm patterns and an increased old-school electro approach composed with beautiful sound sculptures. Kite is not exactly reinventing synth-pop music, but their sound is based on old standards mixed with a very own and contemporary touch. And that’s precisely what makes this band unique because there’s only one Kite active in this scene. I was amazed by the great evolution in the global production of their work. “True Colours” simply confirms this great move forward. The song is somewhat moodier, but again accomplished by divine sound treatments. The vocals were produced in a real passionate way here.

“Nocturne” is the ultimate song and appears to be the perfect ‘outro’ cut because of its somewhat evasive and instrumental format.

Conclusion: Kite has progressively, but surely gain a real high level of synth-pop music, which is merging creativity and professionalism. This is a brilliant exposure of Kite’s growing talent.