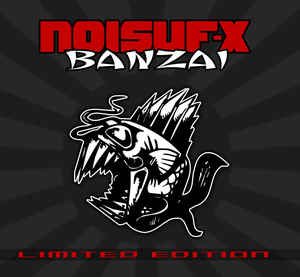 Background/Info: Jan Loamfield is back on track, unleashing the ninth full length album of his Noisuf-X project. This name for sure became one of the absolute leading formations in its genre, having composed numerous hits.

Content: The secret sound formula of Noisuf-X is simple to describe, but hard to reproduce! Jan in a way exposed the main ingredients of his creation on his previous work entitled “#Kicksome(b)ass”; you need solid bass lines carried by pumping kicks. That’s precisely what “Banzai” is all about. One more thing, which remains a real trademark of Noisuf-X are the samplings.

The title song is the perfect song to fully understand what Noisuf-X is all about while he also added a funny Japanese tune during the song. Jan Loamfield is once more manipulating his sounds and noises like a real sonic alchemist. The album comes to an end with a 2017-version of the “Jezebel”-hit (originally released on the “Tinnitus”-EP released in 2006).

+ + + : Noisuf-X remains the reference in a music style he definitely is one of the pioneers. This industrial-rave style is made for the dancefloors and will again drive you crazy. The solid, pumping kicks sounds like a command to get you in a dance while the dark and vibrating bass lines will get you by your throat. The samplings are once again an essential item of the work while the title song is the absolute new hit! This is raw and industrial, pure rave and dance ecstasy! It also confirms the endless creativity of this artist simply confirming his status of industrial dance guru!

– – – : While I’m still totally addicted to the sound of Noisuf-X I can’t get away from the idea that there’s no real innovation. Jan Loamfield sounds a bit in an automatic pilot status, his work becoming a little less predictable. So it’s maybe time to inject new explicit elements in the work.

Conclusion: The master of industrial rave has created new stuff to get you into dance: ‘Banzai’!!!