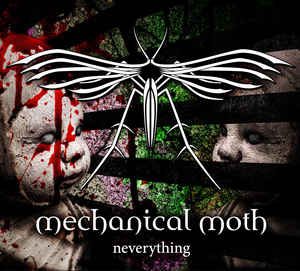 Background/Info: Mechanical Moth became an established formation from active on the wide roster of Scanner/Dark Dimensions. The German formation set up in 2002 and mainly driven by front man Tandrin moved through several line-up changes and is now back on track unleashing their 6th studio album.

Content: I’ve to admit I’ve never been a huge addict of Mechanical Moth. “Neverything” however will change my point of view. The work remains inspired by gothic moods, electronic sounds, guitar and mainly zombie-like vocal parts (mainly in German). But this production sounds more elaborated. There’s more harmony between the different aspects of the work, but still subtle treatments, cool female backings and evasive passages.

+ + + : I’m not saying that Mechanical Moth has completely reinvented their initial sound, but this work is, according to me, their best production in history. There’s more maturity in the global writing, but still a fascinating merge between dark atmospheres at one side and a kind of minimal wave-pop style at the other. Some songs are a bit retro-like while others are more into a goth-rock approach. I like this variation, accomplished by great sound arrangements played with piano parts and a few outstanding choruses. “Neverything” is a beautiful work revealing several great songs!

– – – : One of the few elements, which can’t totally convince me are the more into goth-rock songs. It here only concerns a few couple of cuts while the work features 13 songs. I’m maybe missing an absolute ‘hit’, but I got multiple great and essential songs instead.

Conclusion: The fans of the band will maybe not agree, but “Neverything” is without a shadow of a doubt the ‘opus magnum’ from Mechanical Moth. There’s a great evolution in the global sound writing and production!