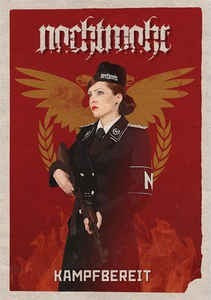 Background/Info: Nachtmahr doesn’t need any further introduction. Thomas Rainer is back on track unleashing the 6th full length of his dark-electronic creation.

Content: Quite honestly the last Nachtmahr albums couldn’t totally convince me. I got the impression that the creative mind of this great musician got frozen and that the image became more important than the sound.

“Kampbereit” is the right title for this ‘return’ to the sources. The album has been introduced as a way back to the early years of the band and that’s rather true. Nachtmahr is hitting back with rage and merciless electronic treatments. The sound remains driven by dark-electronics and other EBM formulas, but it becomes harder and a bit industrial-minded as well. Thomas Rainer also remains a talented melody maker and that’s precisely what most of the choruses are revealing. This album sounds like the hybrid between early L’Âme Immortelle (for the melody lines) and early Nachtmahr (for the industrial approach).

“Kampbereit “is moving in between heavy cuts and a few softer, but beautiful songs. Thomas Rainer is once more singing like a possessed, but this rage and anger create a delicious symbiosis with the music.

+ + + : I like the powerful and merciless approach of multiple songs. There also is a great progression in the writing process. The songs are elaborated and driven towards a climax. Last, but not least there again is a great artwork featuring the familiar provocative, sexy and uniform-like pictures.

– – – : Nachtmahr still moves on with this fine taste of provocation and controversy. Ask about it at someone who never heard of Nachtmahr before and you’ll fully understand what the image of a band can do…

Conclusion: Nachtmahr strikes back with a new and dangerous weapon; this album is a new killing machine for dancefloors and that’s a while ago I hadn’t heard such a convincing album from this band.