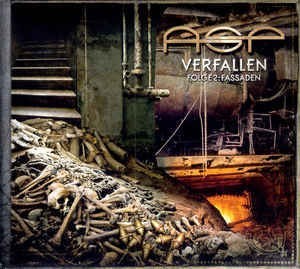 Background/Info: ASP is one of the Trisol flag holders, which can look back at a serious and respectable discography. Alexander Spreng (ASP) is now back on track with the 2nd part of “Verfallen”. It all started last year with “Verfallen / Folge 1: Astoria” and the flamboyant Astoria Hotel of Leipzig. ASP got inspired by a short story by German author Kai Meyer’s “Das Fleisch Der Vielen” (“The Flesh Of Many”). It has been introduced as a wonderful, tragic, yet romantic horror story, featuring protagonists Paul and the mysterious spectral figure ‘Astoria’.

Content: The previous work already revealed a diversified and versatile work, but this new opus seems to move on exploring multiple influences. The album reveals a mishmash of influences, which are mainly driven by gothic beauty and cabaret minimalism, but still empowered by metal passages and refined by beautiful electronic treatments.

A few beautiful piano arrangements can be heard as well. They inject a certain artistic elegance to the album. And you sometimes get the impression that classical music has been an important source of inspiration as well, but rapidly converted into heavier goth-metal passages. “Fassaden” can be now sweet and folk-minded, but later on heavier and into epic parts.

+ + + : The eclecticism of this work is absolutely impressive, but especially well-crafted. There’s a constant and imaginary duality between heavy passages and delicate and more refined aspects. The artwork again features 2 booklets and several pictures of Joachim Luetke –who already worked for great artists.

– – – : The versatile element of the work makes it sometimes hard to catch and maybe not that accessible for a wider audience.

Conclusion: This album clearly sounds like belonging to a conceptual theme, which has been adapted into a kind of gothic-cabaret music. This work has a realm strong visual appeal that might be a great source of inspiration for live performances.