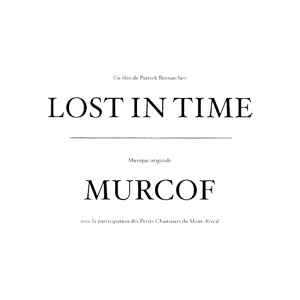 Background/Info: Fernando Corona was born in Mexico, grew up in the USA and is now based in Barcelona (Spain). His work has been often characterized by a minimalistic approach. “Lost In Time” is a soundtrack for the same-titled film by Patrick Bernatchez. It was originally released in 2014 as vinyl on Casino Luxembourg and now re-released on CD format by Glacial Movements.

Content: I honestly never heard of the movie and the soundtrack remained unknown to me. “Lost In Time” clearly sounds as a soundtrack featuring 14 tracks entitled as ‘chapters’.

The work is extremely dark and would perfectly fit to a horror movie. You’ll notice a few passage with children chants, which are only accentuating the torment hanging over this work. There always is a mysterious sphere hanging over the work.

+ + + : You rapidly recognize the soundtrack format of the album by its multiple short and somewhat fragmented cuts. But the main tracks are extremely well-crafted and progressively lead the listener to the ultimate state of fear. Despite of the ‘terror’ running through this album it also has something delicate and at the same time overwhelming. I recommend the mysterious sounding “Chapitre VI” for its Eastern sound connotation and “Chapitre VIII” for the echoing percussion.

– – – : I regret a few tracks remaining a bit unaccomplished, but that’s because of the soundtrack format. This is music you really have to discover together with the film.

Conclusion: This soundtrack is absolutely obscure and freaky, but great!