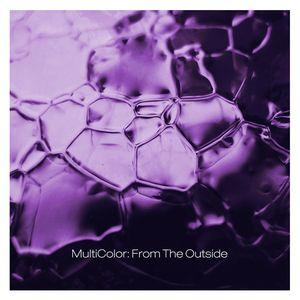 Content: The last year released debut EP “Ciclicity” by MultiColor revealed an interesting mix of influences moving in between IDM, glitch and soundtrack music. Anton Guskov is now back on track with his debut full length on CD format revealing 8 new cuts.

The least I can say is that this young artist is a talented sound architect who sounds like inviting his audience into an imaginary labyrinth of sound intelligence and sophistication. He constantly mixes elements of IDM together with deeply electro-ambient and even soundtrack-wise passages. The ambient side of the work makes it all very visual-like and still a bit mysterious. “Three Languages” is a deeply artistic illustration of this delicate touch in cinematographic creation.

A similar, but more impressive creation comes back at “Lost Moment”. This is a little sound pearl reflecting the chilling ambient aspect and a minimal electro approach made of irresistible sound treatments. There also is a great and exciting progression running through this song. The minimalism is an element, which comes through on a few more cuts. “His Names In Your Eyes” is a real noticeable song in the genre, which again surprises the listener with its well-crafted and somewhat cold bleeping sequences.

“From The Outside” sometimes makes me think of poetry that has been adapted into sounds and noises. This feeling is reinforced by the ambient character of the creation. The music is all about little sound details, which better comes through when listening to this album with headphones. I can’t say that “Sacramental Moments” is my favorite cut of this work, but it marvelously illustrates the little noises and delicate details this album has been made of. I can absolutely tip the impressive final cut “Permanent Ascent”, which is a bit more into experimentalism, but grows towards an overwhelming apotheosis. I also have to mention one of the debut cuts (cf. “Indecisive Dream”) for its IDM-style merged with fragmented female chants elevating this cut to be a pure masterpiece.

Conclusion: MultiColor is one of the newest and upcoming sensations in IDM. This work reflects great maturity emerging from the constant sound manipulations.