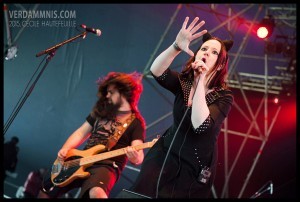 The Belgian electro goth metal act Lovelorn Dolls return with the 13-track counting “Happy Valentine” single. For this release, the female-fronted Brussels-based duo also recorded an unplugged ghost-piano version together with Maja Marcucci next to the original version.

Next to that 4 different artists collaborated with the duo to create 4 remixed versions, starting with the band’s own producer Maxx of Italy’s Helalyn Flowers, the UK dark techno club DJ Simon Carter, Belgian electro pioneer Jean-Marc Lederman (The Weathermen, Ghost & Writer, …) who made a very attractive minimal rework and Restriction 9.

Also included are 7 (!) bonus live songs recorded during their stunning performance at the tumultuous Eurorock festival in May 2015. They survived it, and you can now hear that performance live.

You can already download this EP, which will be officially out on October 9., from Bandcamp and get already 3 tracks. Below is a trailer for the new EP.