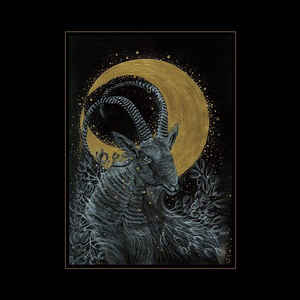 Content: The dark atmosphere hanging over this work rapidly conjures images of isolation and other horror atmospheres. Typical obscure sound treatments, icy sweeps, ghost-like growls and I presume field recordings are the main ingredients of this poignant work.

+ + + : Good ambient music always has this magic visual appeal and it’s not that different here. But “The Rituals” also reveals great sound treatments, which remains dark and sometimes moves into ritual passages. From the monotonous, but ghost-like sounds towards heavier sonic treatments accentuated by some drones to finally end in a pure cinematographic approach this album has a lot to offer. It’s an elaborated opus with a great finale and especially the tracks together with Treha Sektori and Asmorod.

– – – : I like the progression in the tracklist although some cuts from the debut are missing the real evil spirit from the final part. I expected a bit more out of the collaboration with Aprocryphos.

Conclusion: Monocube sounds like the architect of an imaginary obscure area, which quickly becomes a sonic temple of evil forces.