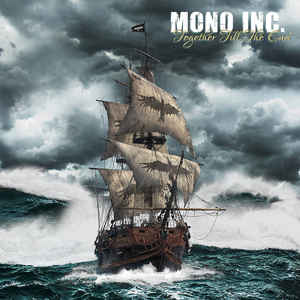 Background/Info: Singer Martin Engler and his acolytes are back on track unleashing the ninth studio album of Mono Inc. The German formation became one of the most noticeable bands from the German goth-metal & alternative rock scene. The new work features a new opus with 12 songs and an extra disc featuring surprising remixes.

Content: Mono Inc. never stopped their progression throughout the years. “Together Till The End” is an invitation to embark on a powerful and melodic trip constantly mixing elements of dark and alternative rock, metal riffs and melodic gothic melody lines. The overwhelming choruses are one of the main characteristics of this new opus, while in a way being the band’s trademark.

The power has been mixed with delicate arrangements and charismatic vocals, but still feature a few surprising contributions from Ronan Harris (VNV Nation) and another tracks featuring Tilo Wolff (Lacrimosa), Joachim Witt and Chris Harms (Lord Of The Lost).

The bonus CD mainly consists of some surprising remixes by bands such as Palast, Solitary Experiments, Faderhead, Eisfabrik and Blitzmaschine. It’s quite surprising to discover the original songs transposed in mainly pop-orientated versions. You also will discover a live, unplugged song plus the original versions of both songs featuring the aforementioned guest singers.

+ + + : “Together Till The End” is a true masterpiece revealing a perfect balance between power, melodies and sensibility, but still a perfect match between orchestral/epic arrangements and subtle sound treatments. Mono Inc. realized a tour de force inviting Ronan Harris to sing on the beautiful “Boatman” and a trio of famous guests on “Children Of The Dark”. The global production is absolutely amazing while the album is filled with numerous potential hits. “Together Till The End” is an accomplished piece carried by great musicians and a charismatic singer.

The bonus disc transposes most of the original songs into a surprising electronic-pop approach. Most of the remixes have been made by label mates. I was deeply impressed by the remixes of Eisfabrik and Blitzmaschine.

– – – : This album will become without a shadow of a doubt one of the best productions of 2017 so I don’t have any negative points. I just can imagine that some fans will be a bit disappointed by the electronic remixes from the bonus disc.

Conclusion: You have numerous great albums, but not many outstanding pieces. “Together Till The End” is an album I can’t get enough from so it definitely is a masterpiece!

Best songs: “There Comes A Time (Back to Life)”, “Children Of The Dark”, “Boatman”, “Out In The Fields”, “The Banks Of Eden” + “Across The Waves – Takatiktok Mix by Eisfabrik”, “This Is My Life – Kondensat Remix by Blitzmaschine”.

Since you’re here … … we have a small favour to ask. More people are reading Side-Line Magazine than ever but advertising revenues across the media are falling fast. And unlike many news organisations, we haven’t put up a paywall – we want to keep our journalism as open as we can. So you can see why we need to ask for your help. Side-Line’s independent journalism takes a lot of time, money and hard work to produce. But we do it because we want to push the artists we like and who are equally fighting to survive. If everyone who reads our reporting, who likes it, helps fund it, our future would be much more secure. For as little as 5 US$, you can support Side-Line Magazine – and it only takes a minute. Thank you. The donations are safely powered by Paypal.
Tags: Blitzmaschine, Eisfabrik, Faderhead, Mono Inc.