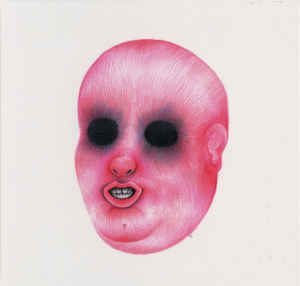 Background/Info: After a few self-released production French formation La Main (translated ‘The Hand’) joined hands together with Unknown Pleasures Records to set free their first official full length. La Main has been introduced by their label as ‘the best what happened to France since Taxi Girl’, which is a rather ambitious quote.

Content: La Main definitely has found their right home at Unknown Pleasures Records. It’s a pure vintage-like formation inspired by the 80s. The sound is pretty minimal while all of the lyrics have been sung in French (except one song featuring Italian parts). Some of the bass lines will remind you of The Cure, but I also have to mention Indochine and there indeed is a minimal electronic touch reminding me of Taxi Girl. The minimalism also emerges from the lyrics. There’s a kind of poetry format dealing with tormented love songs and other sad visions of life.

It’s an old-styled composition carried by good-old synthesizer parts. Most of the songs are melodic while a few cuts are more into experimentalism. The final cut is the title song from their previous self-released full length remixed by Maman Küsters (another great formation on Unknown Pleasures Records).

+ + + : I know there’s a long-duration twist between lovers of analogue instruments at one side and digital- plus software freaks at the other. One thing is for sure, the magic of analogue gear is something really apart and that’s precisely what makes the splendor of this album. “L’Heure De Salir” is pure nostalgia and for sure an album that will appeal to all fans of French electro/new-wave music, but it still is an accomplished production revealing many great songs. I like the global atmosphere and the minimal electronics. “Le Sol Gelé” is my absolute favorite cut coming pretty close to the spirit of Indochine.

– – – : You don’t hear me complaining about the content of this album. I’m just not that fond of the front cover although it’s an easy noticeable one.

Conclusion: I have some reservation about La Main becoming the natural heir to Taxi Girl, but I have to admit that this work brings good-old souvenirs back to life. It feels a bit like travelling back in time and awakening somewhere in the midst of the 80s where La Main could have become a referential band.

Italian electro-wave project TourdeForce releases tribute to Death In June: ‘Six in the Key of Death’