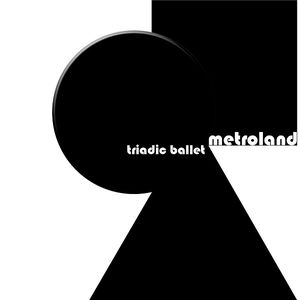 Content: Passengers S & A strike back with their 2nd full length album. Their debut full length “Mind The Gap” (2012) took the electro-pop community by surprise and rapidly became a praised album all over the scene. The conceptual approach of the Belgian band, but mainly their Kraftwerk-ian pop music makes their uniqueness.

I was really wondering how they would fill the gap from their successful debut opus towards “Triadic Ballet.” The main concept behind this work is the early 20th Century Bauhaus movement created by Walter Gropius. It’s an interesting movement, which was a kind of ‘total art concept’ and that’s precisely what has inspired Metroland.

The first 3 songs appear to be a kind of ‘trilogy’ around “Design.” It starts with an intro (cf. “Design – Unity”) while “Design – Hierarchy” sounds in the purest Metroland style. I think that the term ‘Kraftwerkian pop’ is in its place while “Design – Variety” sounds a bit harder and even EBM-inspired. The bass line is much harder while the cool bleeps are more into the familiar style of Metroland. It no longer is a secret that both members of the band were also the duo active under the Ionic Vision moniker, which explains the body touch hanging over a few cuts. “3 Directors” and “Ikone Der Moderne” both reveal a few more EBM elements although the sounds remains characterized by fine bleeps and vintage sounding synth layers.

The first part of the album is cool, but not really reaching a climax. The previously released EP-title song “Zeppelin” appears to be the first real highlight. It’s a great danceable song composed by meticulous sound arrangements and great vocals. The vocals don’t really appear to be a main element of the work and yet the production is really special. The robotic effects are rather stereotypical, but still very efficient, and Metroland again used multiple spoken vocals, which sound like samplings.

“Machines Gone Mad” coming up is another noticeable cut and a potential hit as well. This songs sounds like the offspring between Kraftwerk and EBM. The title song is another smashing piece with subtle bleeps and treatments. I also like “Art + Technology” for the Flemish sampling running through the song while “Les Trois Couleurs” features French spoken lyrics. This song also shows a more evasive side of Metroland. This wafting sensation is also recognizable at the 13th and final song of the regular album entitled “Utopia.”

Over now to the 2nd disc featuring 11 songs/remixes. I’m not into remixes, but I have to admit that Metroland took really care to select a qualitative list of artists. Most of those artists are not exactly familiar bands of the dark-electro and EBM scene, but most of them did an amazing job. “Machines Gone Mad” remixed by the totally unknown, but great Lifelong Corporation is an absolute highlight. The song is mixing elements of electro-pop, EBM and intelligent technoid elements.

I also like the minimalism added by bands like Commuter (French DJ), Musicocoon (totally unknown to me) and the excellent The Rorschach Garden. I also have to mention the more into trance inspired remix of “Struktur” by My.Cosmo (German producer).

Each disc features 11 songs, but the 3rd one features more familiar names. Absolute Body Control added their typical vintage touch to “Design”. It also is one of the most noticeable remixes of this disc. Another absolute attention grabber is the remix of “Les Trois Couleurs” by the German female artist “Machinespirit”. This mix reminds me to Telex while it also sounds a little less lounge-like. Trinity Ward (already a discovery) made a rather scary-minded mix of “Machines Gone Mad”.

The award for minimalism on this disc goes to Paul Alty (one more name to discover) and the remix of “Struktur.” Last, but not least, Vile Electrodes made a surprising and even somewhat industrial-sounding remix of “Utopia.” Some more familiar names like Oberkampf, Diskodiktator, System and Franck Kartell all did a cool job, but aren’t my personal favorites here.

Conclusion: Metroland patiently took the time to accomplish this new album and I can really say it already is a worthwhile experience. I however have a little preference for “Mind The Gap.”