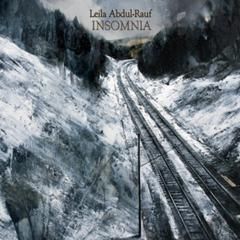 Content: Leila Abdul-Rauf operates from San Francisco. This multi-instrumentalist contributed to numerous projects leading her to work with interesting artists and I here especially think of Tor Lundvall.

Joining the big Malignant family will probably increase her popularity as a solo-artist while it also appears one of the most surprising and I even dare to say unexpected releases on Malignant. “Insomnia” has been released on the sub-division Antibody, but it especially is the kind of reverie and delicacy of the production that surprise me. Malignant Records and the different sub-labels are mainly characterized by dark-ambient, death-industrial, noise and other terror-like music genres.

Leila Abdul-Rauf” however reveals a dark touch, but the compositions are more into a kind of delicious and mysterious evasive perspective. It sometimes sounds a bit spooky –like featured at the opening/intro cut “Midnight”, but the main essence of the work invites the listener to embark for a rather relaxing trip. There’s a kind of enlightening sensation running through this work reaching a kind of harmony between mysterious sound spheres and space-like sonic travels. The tracks were accomplished with refinement and delicacy.

It all sounds pretty cinematographic as well and I here refer to cuts like “Clock Glows”, “Edges Of A Mirror” and “Absence.” Several tracks remain pretty short, which also is rather typical for some soundtrack-minded compositions.

“Insomnia” has been compared with the work of Tor Lundvall, but I noticed a less desolate and abandoned impression by Leila Abdul-Rauf. I have to admit that some of her vocals are maybe a bit comparable, but globally speaking this work is not overwhelmed by elements of obscurity. It just remains pretty mysterious, and a little less intriguing. I also like the contribution of several guest musicians adding an artistic touch to the album and playing instruments like guitar, e-bow, violin and even vocals (on “Pull”).

Since you’re here … … we have a small favour to ask. More people are reading Side-Line Magazine than ever but advertising revenues across the media are falling fast. And unlike many news organisations, we haven’t put up a paywall – we want to keep our journalism as open as we can. So you can see why we need to ask for your help. Side-Line’s independent journalism takes a lot of time, money and hard work to produce. But we do it because we want to push the artists we like and who are equally fighting to survive. If everyone who reads our reporting, who likes it, helps fund it, our future would be much more secure. For as little as 5 US$, you can support Side-Line Magazine – and it only takes a minute. Thank you. The donations are safely powered by Paypal.
Tags: Leila Abdul-Rauf