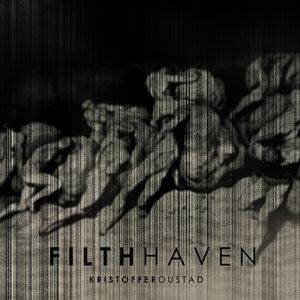 Content: Kristoffer Oustad is one half of the project Kristoffer Nyströms Orkester, which gained some recognition on the Malignant roster. Kristoffer Oustad has now released his debut solo-album, which has been introduced as an intimate piece of work.

I can’t really say that this work sounds intimate to me, but I was really fascinated by the global sound production of “Filth Haven”.

Next to the familiar dark-ambient approach this artist seems to have taking care of the global sound production, which is absolutely gorgeous. You feel a truly kind of passion emerging from the notes and dark atmospheres while multiple field recording adds a solid visual character to the work. The sound effects on top of the work are absolutely impressive and from start on you feel like you are becoming imprisoned within the web of this album.

“Elberton 1979” is a beautiful dark opener revealing ghost-like whispers and apocalyptic sound effects, but “Traveller” coming up next is a real masterpiece. This cut was made by strange electro signals and dark blasts while the composition also reveals multiple sound manipulations and globally speaking a great progression that will entertain you for 10 minutes.

The album clearly appeals to the imagination, but the squawks of crows, thunder and other icy, and echoing sequences will keep all your doubts away: “Filth Haven” is the last gate before hell! That’s the kind of feeling that has been accentuated at “Liquidator” and “The Arch”. The last mentioned track is a new (and final) apotheosis of darkness. The least I can say is that Kristoffer Oustad has composed a real poignant –and maybe therefore intimate, opus.

Conclusion: This album clearly has a different approach in dark-ambient music; it’s more elaborated by multiple sound manipulations while the mix and production are simply outstanding.

Since you’re here … … we have a small favour to ask. More people are reading Side-Line Magazine than ever but advertising revenues across the media are falling fast. And unlike many news organisations, we haven’t put up a paywall – we want to keep our journalism as open as we can. So you can see why we need to ask for your help. Side-Line’s independent journalism takes a lot of time, money and hard work to produce. But we do it because we want to push the artists we like and who are equally fighting to survive. If everyone who reads our reporting, who likes it, helps fund it, our future would be much more secure. For as little as 5 US$, you can support Side-Line Magazine – and it only takes a minute. Thank you. The donations are safely powered by Paypal.
Tags: Kristoffer Oustad