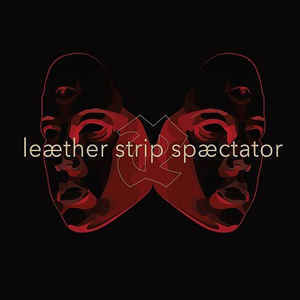 Background/Info: Claus Larsen is back on track unleashing his newest full length and the first album released on Rustblade. Leæther Strip remains one of the absolute leading 90s EBM formations, but remains very hot since his comeback in 2006. “Spæctator” has been introduced as a very special album, which took 2-3 years to achieve and meant as a mental exorcise after the loss of Claus’ mother and severe health problems of his husband.

Content: “Spæctator” reveals 10 new songs plus 2 remixes. The opening song reveals a typical EBM bass line, which reminds me a bit to Front 242, but rapidly moves into the typical Leæther Strip sound formula. The sound remains carried by hard, danceable kicks and these typical dark and bombastic bass lines. All Leæther Strip albums since the comeback of the band don’t feature the aggressive taste of the Zoth Ommog years although it remains a dark and exciting experience in sound. It’s quite similar for the vocals, which are no longer enraged, but definitely charismatic and spooky-like.

You’ll notice some songs with a kind of melodic and even dark-pop flavor on top while other passages are pure vintage-like. Claus Larsen also knows the right formula to compose carrying choruses, which remains an essential element in his work.

Next to the regular edition of this new opus there also is a box featuring a vinyl, an extra disc entitled “Yes I’m Limited VIII” plus the regular CD with 2 extra remixes by Retrogramme and Digital Anodyne.

+ + + : What I’ve always liked in Leæther Strip is the very own and recognizable sound-DNA created by Claus Larsen. You directly recognize the bass lines and the kicks while there also is this kind of unique arrangements on top plus Larsen’s very unique timbre of voice.

“Spæctator” sounds like a successful return revealing an elaborate album mixing different dark electro elements. There are a few potential hits featured, but I’ve a little preference for “Luc Van Acker” and the dirty samplings running through the song.

– – – : I can’t say that Leæther Strip innovates, but just holds on a successful sound formula that has been improved all over the years. Both remixes don’t exactly add a bonus to the album.

Conclusion: Claus Larsen is an EBM veteran who hasn’t lost his initial magic. The work became less aggressive and in a way somewhat inspired by 80s pops elements, but it still has this irresistible power to make people dance!