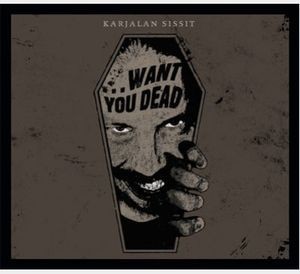 Content: This is the first album in nearly 6 years for Karjalan Sissit, but it for sure is an opus that will enter into the band’s history. The title sounds like a misplaced, but freaky wish, which was inspired by the influential sources of this project.

Mastermind Markus Personen always has been inspired by the darkest themes in life, which mainly reflect social items. The vocals have been sung and produced a heavy screaming way. It all sounds like Personen is exorcising his own demons in life while the sound has been empowered by industrial percussion and tormenting ambient atmospheres.

Electronic manipulations and guitar effects both create a disturbing sound evoking cold, cellar atmospheres and harsh screams reminding me of legendary acts like Last few Days and Brighter Death Now. The cadence has been sometimes empowered and accentuated by martial inspired rhythms. Both debut tracks “Kantapää Lapiossa” and “Vittumainen Yksinäisyys” truly are masterpieces standing for the resurrection of Karjalan Sissit. This industrial-ambient style sounds like the last gate to hell.

We next enter into quieter, but still tormented sound fields. The vocals are somewhat spooky now or alternating whispering- and screaming parts (cf. “Firman Isoin Puliukko”).

But that’s just a better way to get back to the heavy side of this work, which also stands for the extreme tormenting sound emerging from “Läpi Elämän Helvetin”. This track appears to be one of the best cuts ever written by Karjalan Sissit. It reflects one of the highest imaginable states of terror symbolized by music. It’s a mix of ambient and industrial elements, but empowered by a ritual touch as well and epic arrangements. “Totaalinen Kaaos” is one more master piece and quite similar to the formula of “Läpi Elämän Helvetin”.

I don’t know if Markus Personen, Peter Bjärgö and Forn Bragman found their inspiration in alcohol, but they’ve achieved one of the darkest and most terror-like releases of their career.

Conclusion: “…Want You Dead” definitely stands for the darkest and most gore-like productions in the industrial-ambient genre. It’s a masterpiece touched by the genius of dark demons.