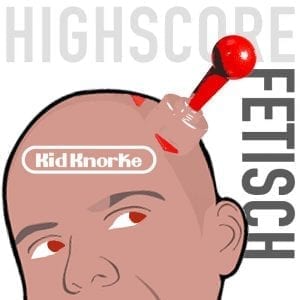 Background/Info: Kid Knorke is a German project releasing its first full length album. After a previously released EP this new work will be an introduction to particular sound universe of Kid Knorke.

Content: The music has been defined as ‘electro-punk’, but it first of all resulted from a truly passion for vintage gear like gameboys sounds and the famous C64. It creates a link with Welle: Erdball, but the approach is globally speaking totally different. Kid Knorke is pure fun, featuring easy recognizable passages from bands such as Depeche Mode, Soft Cell and even 2 Unlimited. Nothing is crazy enough and that’s an aspect that also comes through  in the lyrics (all sung in German).

+ + + : If you like early electro-pop music with a funny punk attitude on top, this album will give you full satisfaction. This vintage sound approach remains something really unique and definitely easily recognizable. It’s vintage-like and pure nostalgia. One of my favorite cuts entitled “Undertaker vs. Cpt. Einsicht” is probably also the most serious one (sound-wise).

– – – : Good-old gameboys sounds are cool, but Kid Knorke is really abusing of these old effects. It starts to become a little bit annoying after a while. You sometimes get the impression that you are walking on a fairy ground instead of listening to an album.

Conclusion: I like this album for a couple of songs, untill it all becomes a little bit repetitive and predictable. It however is a funny experience.