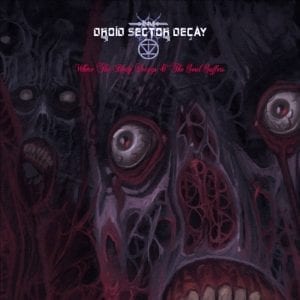 Background/Info: Droid Sector Decay has already been active since 2009 and has released a respectable number of productions (mainly EP’s). they’re now achieving their new album and bring this single/EP as teaser.

Content: Droid Sector Decay explores the EBM style at this new work. The band doesn’t exactly repeat itself although they remain faithful to their sources of inspiration. Now industrial-minded and next dark-electro like this work is more into the EBM vein. The songs are unpolished, carried by 90s kicks and feature evasive passages. Droid Sector Decay remains first of all a band with a very personal sound approach.

+ + + : I always have supported bands trying to create something personal. This is not pure EBM, but it’s inspired by this music genre getting the production danceable. There’s something 90s-like running through the 3 songs, which is mainly characterized by an unpolished sound production. The title song is cool, but I also like the more complex “The Shroud Of Silver Poison”.

– – – : The unpolished and raw-orientated sound production might be intentional, but it doesn’t always sound that professional. I think it’s the main element this band has to reconsider and maybe improve.

Conclusion: Droid Sector Decay is not exactly what I would call a band composing groundbreaking productions although there’s something special in their sound. I’m still convinced they can do better so let’s see what the announced full length will sound like.

Best songs: “The Shroud Of Silver Poison”, “Where The Body Decays & The Soul Suffers”.