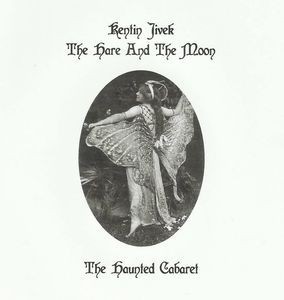 Content: We already got the opportunity to discover the French neo-folk artist Kentin Jivek while The Hare And The Moon is another, but less familiar neo-folk and experimental solo-project.

Both artists joined forces to accomplish this ‘haunted cabaret’ featuring 7 tracks. Kentin Jivek took care of the lyrics and vocals while The Hare And The Moon made the music and sounds. The work starts off with the title-track, which truly sounds like an intro, but isl an invitation to join an imaginary fairground of the early 20th Century animated by the music of an organ. It creates a particular atmosphere, which serves as a basis for “The Haunted Cabaret.”

The work constantly moves in between neo-folk and neo-classic compositions, but I can’t really say that this work belongs to one explicit genre. It rather sounds as the result of different ideas that have been brought together. There sure is a dark flavor hanging over the songs while the French lyrics clearly deal with darker and mysterious themes. “Petite Mort” is an explicit and post-orgasmic exposure of Kentin Jivek’s creativity. “Godhead” is more explicit and even tormenting because of the particular timbre of voice of this song. It all sounds like God appeared in person to achieve this particular song, which sounds a bit like it was composed for a funeral. The requiem-touch also emerges on, “Petite Mort.”

The vocals clearly are important and it also comes through in the narrating style on several cuts. “Das Narren Schiff” is a pretty cool exposure, and a noticeable song for the guitar playing (by Kentin Jivek) and the somewhat Eastern sound texture while a kind of wind-bells can be heard in the background.

Conclusion: This is music for a kind of dark cabaret while characterized by a strong theatrical appeal.

Since you’re here … … we have a small favour to ask. More people are reading Side-Line Magazine than ever but advertising revenues across the media are falling fast. And unlike many news organisations, we haven’t put up a paywall – we want to keep our journalism as open as we can. So you can see why we need to ask for your help. Side-Line’s independent journalism takes a lot of time, money and hard work to produce. But we do it because we want to push the artists we like and who are equally fighting to survive. If everyone who reads our reporting, who likes it, helps fund it, our future would be much more secure. For as little as 5 US$, you can support Side-Line Magazine – and it only takes a minute. Thank you. The donations are safely powered by Paypal.
Tags: Kentin Jivek & The Hare And The Moon