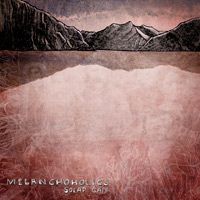 Content: After some releases on labels like Deafborn and Drone Records the Düsseldorf based project Melanchoholics now signed to Eibon Records to unleash its latest opus.

I can’t say that “Solar Café” is pure dark-ambient but rather a mix of different styles, which explore the wider fields of experimental music and finally becomes pretty soundtrack-like as well.

Melanchoholics defines its music as creating ‘mad extensive soundscapes and almost cinematic soundtracks to psychotic euphoria and intoxicated wastelands’. That’s a rather weird, but maybe appropriated description, which has been transposed into a fascinating noise experience mainly consisting of guitar and manipulations plus field recordings and multiple studio tricks and arrangements. The work is obscure and always experimental. Some spooky –mainly spoken, vocals join in at a regular basis reinforcing the intriguing format. The guitar sounds mainly ambient-like and can’t be compared with the ‘usual’ way of playing guitar. It simply confirms that this instrument is much more than only devoted to rock-, metal- and related music genres.

Next to the guitar parts you’ll also notice multiple field recordings, which often reflect some elements of nature and I’m here thinking of water sounds and birds. These elements are rather prospering, but Melanchoholics manipulate them with dark sonic spheres creating a desperate feeling. There’s a kind of progression towards darker cuts finding its apotheosis on the final track “Minus 1 One.” It’s one of my favorites although I still enjoyed the previous cut “Nuclear Welfare.”

Conclusion: “Solar Café” is a passionate experimental outburst reinforced and accomplished by dark-ambient and soundtrack influences.