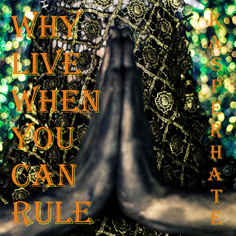 Background/Info: This is album number four for German project Kasper Hate, which took the habit since the debut album (cf. “Wolf Skill”) released in 2014 to release a new opus every single year.

Content: The previous album “A Hunter Must Hunt” revealed a serious improvement in the global writing- and production process. The new songs confirm this evolution and I even dare to say that Kasper Hate has maybe found its own sound. It’s not the typical approach in electro-pop music, but a more minimalistic creation carried by bleeping sequences. The songs are well-crafted, sometimes animated by harder passages revealing EBM elements. The vocals are rather sterile, but totally fitting with the minimal approach.

+ + + : Kasper Hate is a band that first of all seriously improved most aspects of the global production process. It now resulted in an atypical- and rather original electro-pop style. The artist has found his very own sound, which reflects an intimate character. It feels a bit like a delicate caress to consol the soul. The songs have been meticulously constructed featuring “You Got Me Broken” as most noticeable track.

– – – : A few vocal parts are a little less hesitant and that’s for sure something that has to be improved. I think it’s the main aspect of the production that could have been better, but at the same time it also is one of the most difficult ones. This album is also missing some real highlights; the songs are cool and entertaining, but there’s no real hit. Last, but not least I’m not a huge fan of the front cover, which is poorly inspired.

Conclusion: Kasper Hate is a kind of antidote to all Depeche Mode clones and other synth-pop formations in search of a real sound identity. The album is missing a hit, which would push Kasper Hate into the spotlights.