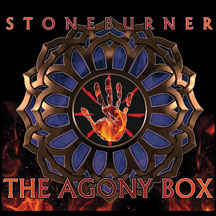 Background/Info: Steven Archer (Ego Likeness) strikes back with the fifth full length of his electro-tribal side-project Stoneburner. This album also is the first one released on Negative Gain Productions while previous productions were released on Distortion Productions.

Content: “The Agony Box” moves on there where previous album stopped. It’s a new exploration of electro-tribal music fields featuring bombastic drum sections, mystic chants and Eastern sound atmospheres. The work –and especially the final part, sounds more cinematographic. It’s not really a new aspect in the sound of Stoneburner although this element is more accentuated than before.

+ + + : Stoneburner deals with a music genre we all know, but where only a few numbers of artists are involved with. You can hear the tribal and especially dark side of the work, which might remind This Morn’Omina and the cinematographic plus Eastern mystic sound approach reminding me of Juno Reactor. Stoneburner is somewhere in between and has never disappointed. The songs are well-crafted revealing great sound treatments and a hypnotic trance feeling. The cinematographic approach is also worthy of examination and is carried by some overwhelming epic arrangements (which might also remind you of Juno Reactor).

– – – : I prefer the tribal-trance approach instead of the soundtrack cuts, but that’s just a personal point of view. The only single aspect I’m missing in the global production is the use of authentic instruments (like conga’s ao), which would inject a more authentic touch.

Conclusion: “The Agony Box” is the perfect album moving in between film music and tribal-trance electronics. Stoneburner became a reference in this music genre although this project is mainly known in the USA and rather unknown in Europe.