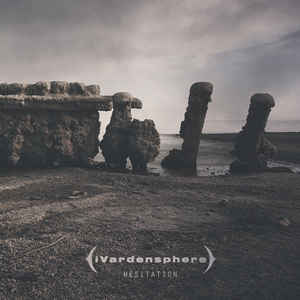 Background/Info: American, ‘collective’ iVardensphere has now been active for several years, remaining a very unique music entity active in the paths of electronic underground music. Still driven by the creative spirit of Scott Fox the band was joined throughout the years by talented members like  Jamie Blacker (ESA) and Yann Faussurier (Iszoloscope). The band has already released seven studio albums and multiple remixes.

Content: iVardensphere remains pretty faithful to their open-minded spectrum of creation and composition. This band clearly doesn’t care about fashion trends, but simply composes music with a very single approach. It’s hard to define the work and easier to catch all influences running through this opus. It remains tribal and trance-like, but also reveals a kind of industrial-body music built up with blasting sound treatments. iVardensphere likes to experiment and use analogue equipment and I think it still is the only way to create something different from ‘average’ music bands.

+ + + : iVardensphere has already accomplished many ‘major’ releases in their discography, but “Hesitation” is without a shadow of a doubt one of their best pieces ever. There’s a fascinating diversity mixing different styles and influences, but also with a perfect balance between sung- and instrumental cuts. The songs have been composed with brilliant sound treatments and driven by great, tribal rhythms. Every single track sounds a bit different, revealing a different focus. This work is a succession of masterpieces getting you into trance during the final part. “Hesitation” has been definitely one of the best albums from 2017!

– – – : When an album moves on the path of perfection, there clearly is nothing you could imagine that needs to be improved!

Conclusion: I think every single music style has bands exploring and creating new paths for other musicians. That’s what we commonly call pioneers or visionary artists. iVardensphere definitely belong to those kinds of sonic scientists!

Since you’re here … … we have a small favour to ask. More people are reading Side-Line Magazine than ever but advertising revenues across the media are falling fast. And unlike many news organisations, we haven’t put up a paywall – we want to keep our journalism as open as we can. So you can see why we need to ask for your help. Side-Line’s independent journalism takes a lot of time, money and hard work to produce. But we do it because we want to push the artists we like and who are equally fighting to survive. If everyone who reads our reporting, who likes it, helps fund it, our future would be much more secure. For as little as 5 US$, you can support Side-Line Magazine – and it only takes a minute. Thank you. The donations are safely powered by Paypal.
Tags: iVardensphere