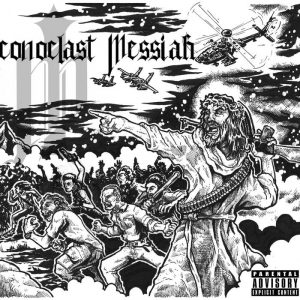 Background/Info: Hailing from Albany (USA) I never heard of Iconoclast Messiah before. I found out that an EP “My Life” was released before this debut album featuring 11 songs.

Content: I didn’t know anything before listening to “Praesagium”, but instantly felt this band was hailing from the USA. There’s a kind of industrial- and electro-rock style, which is quite typical for American artists. The production is somewhat raw and unpolished mixing guitar sounds and electronics. Sometimes a bit bombastic and often supported by dark atmospheres the album is mixing different influences together.

+ + + : I noticed a few melodic passages, which inject some harmony to the work. I prefer the songs with an extra- and explicit electro flavor on top. The most noticeable song appears to be “The Fall” featuring female backing vocals adding an angelic- and emotional touch to the work.

– – – : You can feel this album is more like exorcising early ideas instead of an accomplished production. The songs are suffering from an undermined production process. There’s less difference between verses and choruses.

Conclusion: Just with many other debut albums this band has to gain experience and maturity while moving on to find their own style and improving the global production.