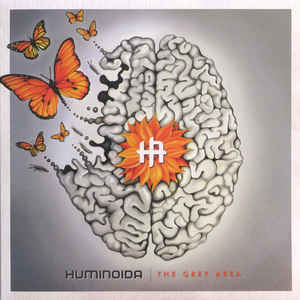 Background/Info: Huminoida returns with a new full length album, which is the second one in the band’s history. A hiatus of 7 years separates both releases although several EP’s have been released in the meantime. Kimmo Karjalainen (previously involved with Active Media Disease and Neuroactive) remains the single member on board.

Content: “Huminoida” always has composed a rather unique electro-pop format. It is clearly distant from the ‘classical’ Depeche Mode-clones and other clichés. “The Grey Area” sometimes appears to be electro-pop music to listen instead of music to dance to. The lyrics are quite important, reflecting the global malaise of the world we’re actually living in. That’s precisely what reflects the title of this work.

It’s an emotional pop format, which however reveals a few more powerful cuts. The opening part (first four tracks) of the work is more entertaining while the other cuts left are more into melancholia and emotion.

+ + + : There’s a cool vintage touch running through this album. The great and unique sound treatments inject some magic here resulting in a brilliant song entitled “Just By Wishing”, which reminds me of Trans-X. I also noticed some solid and even somewhat EBM bass lines in the first part of the work. The second part is different and more refined in production. It feels a bit like Huminoida wants to show a more sensitive side finding its ultimate point at “I’ll Meet You There”.

I also have to say a word about the great 20x20cm booklet joined by the CD. It’s once more a confirmation that a hard copy with the illustration material is so much more than streaming and digital platforms.

– – – : Speaking for myself I was less convinced by the softer side of the work. I don’t have anything against this more sensitive work, but the songs remain somewhat flat here except the beautiful final track.

Conclusion: Huminoida is back on track with a noticeable alternative to stereotypical electro-pop standards. Change is the spice of life…

Best songs: “Just By Wishing”, “Thoughts Like Insects”, “Contradictator”, “I’ll Meet You There”.