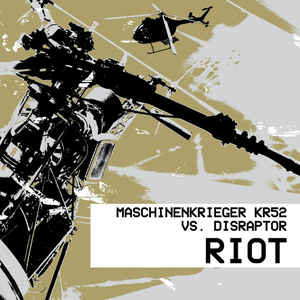 Background/Info: “Riot” is the fourth official full length album by German duo Maschinenkrieger KR52 vs. Disraptor and the first album in five years.

Content: If you’re already familiar with this formation you’ll immediately recognize their heavy and merciless rhythmic-noise approach. It however takes a few cuts to turn the turbo on to full speed. The first part of the work is characterized by rhythmic-noise although a few cuts are ‘softer’ like revealing a will to experiment with new sonic ideas. But “Riot” remains first of all a brain-damaging piece of music, which finds its climax at the very last song of the album.

+ + + : Rhythmic-noise is not exactly the most sophisticated music format, but it’s mainly based upon on heavy, distorted electronic noises and rhythm. And that’s what this band is dealing with. They reveal to be a mature and experienced band in the genre, which have built up the tracklist with progression to reach the heaviest peeks right in the end. The heavy, low resonating cadence will get you in a possible trance, but “Commercial Break Down” is the absolute climax.

– – – : There are no real new elements featured on this album. “Riot” is an album you gone like or not although there are heavier projects in the genre.

Conclusion: Should I dare to consider Maschinenkrieger KR52 vs. Disraptor as an old-school industrial band? Well it’s definitely not a project experimenting with techno/trance elements. They remain faithful to their original sound and the fans gone like that attitude!

Best songs: “Commercial Break Down”, “Against The System”, “Monitoring”, “Recdrum”.