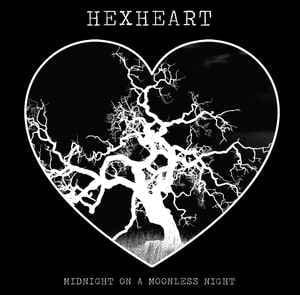 Background/Info: Hexheart is a new project set up by God Module’s Jasyn Bangert assisted by Andrew Pearson (still active in God Module) and Patrick Hogan (Voicecoil). This is the debut full length, which has been introduced as inspired by bands like The Cure, Joy Division and co.

Content: When I started listening to this opus I honestly didn’t know it was a new work by Jasyn Bangert, but his typical timbre of voice and some music arrangements made me think that this work sounds pretty God Module-like although with some different influences on top. There also is a kind of bombast, which rather reminds me of Project Pitchfork. But globally speaking I don’t really see the link with Joy Division and co.

It more sounds like a mix of God Module and other dark EBM formations with some guitar on top. There’s a darker and somewhat gothic flavor recovering some of the songs.

+ + + : Whatever the inspiration of Hexheart and the sound they’d in mind, this album is an interesting production revealing great and accomplished electronic parts, sublime vocals and haunting atmospheres. Hexheart rapidly appears to be a mix between God Module, new-wave and gothic music. There are a few great cuts featured at their debut album.

– – – : “Midnight On A Moonless Night” is a cool work although not a project that will directly make an unforgettable impression. It’s maybe too close to God Module and too far away from their initial sources of inspiration for Hexheart.

Conclusion: Hexheart features elements and inspiration Jasyn Bangert couldn’t have experimented with on God Module. That’s maybe one of the main reasons why this project came alive; well at least that’s the impression I got!