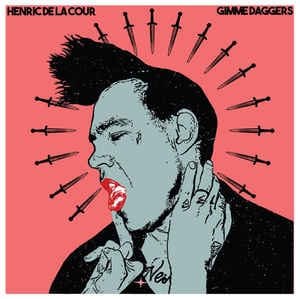 Background/Info: Swedish electro veteran Hendrik De La Cour strikes back with a new full length album, which is the first one in 5 years. He in the meantime released a few EP’s, but the main fact was a documentary entitled “Henric De La Cour” about a very serious and deadly disease he’s suffering from. The disease is no longer terminal, but it clearly became part of his life and undoubtedly from his artistic creation.

Content: The work takes off with a beautiful and accomplished intro, which in a way symbolizes the rest of this opus. “Gimme Daggers” stands for emotional electro-pop music, which is an essential element you can hear in the sound and the vocals. Sometimes moving on the edge of pop-rock music, then flavored with a Depeche Mode touch to next getting accomplished with sensitive violin-like arrangements this work stands for power and beauty.

+ + + : Henric De La Cour is not dealing with average- and classical electro-pop music. His work has something very personal and deeply artistic. The song writing reveals the immense talent of the artist, which is emerging from the sound treatments, the delicate arrangements and global power. I also have to mention the vocals, which are reflecting a deeply emotional exposure while sung with a natural passion. A great album often features outstanding songs and I here especially have to mention “New Building”. This is an absolute masterpiece I have some difficulties to stop playing again and again.

– – – : It’s hard to find minus points when you’ve listened to such as masterpiece. This is according to me the absolute masterpiece from Henric De La Cour.

Conclusion: “Gimme Daggers” will become without a shadow of a doubt one of my favorite albums of the year; maybe the best one! This artist deals with a personal kind of electro-pop music, which he has accomplished with passion, emotion and a truly sense of artistic beauty and grace. It might be strange to say, but this album makes me think of an electronic version of Nick Cave and David Bowie! Respect!